Most people would be inclined to say that the sweet spot to start a biopharma company is Boston – which isn’t just one of the premier biotech hubs, but perhaps the top one according to Xconomy’s Luke Timmerman and others. Vincent Miles works out of Abingworth’s Boston office and has a front-row seat. Based on Miles’ table, the robustness of the Boston ecosystem is obvious from the number of local universities, VCs, and companies. 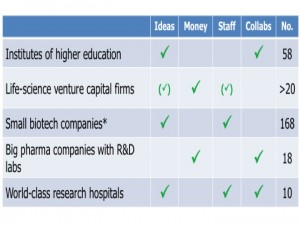 Boston’s muscularity notwithstanding, Miles and the other panelists agreed that it is possible to create viable life science companies in other parts of the country. Besides the critical first step of having a good idea, here were the panelists’ thoughts on other key success criteria – and the importance of location.

There’s no doubt that early stage life science companies need to be able to access capital. But what is the value of cash and a good idea if you don’t have the skills to execute on that idea? The panelists unanimously agreed that companies have to be where there’s experienced talent. However, this leads to the conundrum of “like begets like”, where Boston grows more biopharma companies while Minnesota continues to lead in medical technology. Certain regions feature capabilities that are hard to match anywhere else, and this can be a deciding factor in a company’s decision about where to put down roots. For example, although San Diego lured David Deetz’s diagnostic startup Ativa Medical due to the access to capital and other reasons, ultimately the company selected Minnesota because of the region’s concentrated expertise in electrical device miniaturization, thanks to the long and significant Minnesota presence of Honeywell.

In addition to R&D and the specialized talent it requires, Martin Emerson of Galil Medical believes that certain core competencies (and particularly their leadership) need to stay internal to the company or, at the very least, be co-local – such as clinical, regulatory and testing/quality in the early stages; and later on, supply chain, marketing, and compliance. Product development is ideally done locally, though for some highly specific applications – such as laser etching – it’s more important to find the “best of the best”, regardless of proximity.

On the other hand, if you’re willing to leverage electronic communications, and don’t mind hopping on a plane, a number of functions can be fulfilled virtually, through the use of CROs, SMOs, and business development consultants. Frank Mortari pointed out that while Techne’s headquarters are in Minneapolis, the company has offices in Boston and San Francisco to leverage specific talent concentrated in those areas.

Overall, panelists agreed that companies have a tougher time when they’re distant from industry-savvy investors.  Angel investors prefer to keep their money local, Emerson finds. I’ve concluded the same, in an earlier article on the topic. Likely consumers of the technology (such as physicians) make attractive angels, since they often grasp the innovation’s potential value better than non-specialized individual investors. Distance from VCs is also a hindrance, though one that can be overcome if the idea is compelling and management team is sound – and one doesn’t mind earning frequent flyer miles. Said Miles, “We funded a company where the idea came from Alabama, the researcher was in Tennessee and the CMC done in Rochester.”

The panel was mixed on the value of government subsidies and tax credits to foster industry growth. Mortari warned that strings are often attached to this form of funding. Miles criticized the high effort and long time to get SBIR grants and didn’t believe they were “a strategy to finance a company.” The enormous funds that Massachusetts and California created – the $1 billion Life Sciences Initiative and the $3B California Stem Cell Research and Cures Initiative managed through CIRM– have had mixed success. Emerson suggested that government-based money available in countries like Malaysia, Singapore, and Thailand should be considered by cash-hungry companies that are not averse to establishing operations in such countries. On the other hand, this trend also illustrates the relative weakening of U.S. prowess in supporting life science companies, with possible long-term impacts on the industry.

Mortari pointed out that since Techne’s research consumables are used worldwide, the company seeks out key opinion leaders internationally to use their products and provide feedback for optimization. Similarly, medical device and diagnostics companies like Galil Medical and Ativa benefit from fostering relationships with clinical experts irrespective of location. On the other hand, being close to a large medical research institution can certainly facilitate communication and minimize inefficiency. Miles’ Boston perspective was that its growth as a biopharma hub (recently ranked as the largest hub)  has been driven in no small part by the high concentration of institutes of higher education, scientific leaders and research hospitals that enhance innovation and collaboration through frequent face-to-face communication.

Proximity matters most when….

For MedTech, said Emerson, proximity is more relevant for R&D and supply chain capabilities, and less so when it comes to VCs and clinical experts. For a company like Techne, logistics management and easy access to global distribution capabilities matters.

For most things there was no consensus on the importance of staying local, as shown in the graph below. 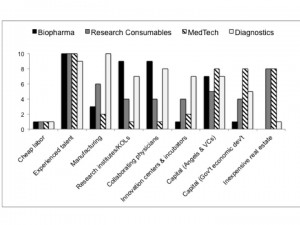 Differences in opinion appeared to be driven primarily by the industry segment of each panelist’s company.  Deetz (diagnostics, Dx) believes that manufacturing should ideally be kept in-house or local, especially if the technology is proprietary. Others felt that this was less relevant. On the issue of proximity to research institutions and universities, Miles and Deetz ( biotech and Dx) valued the high volume of innovations coming out of such institutions and the ecosystem they create, while Mortari and Emerson (research tools and medtech) believed that you find thought leaders wherever they are.  Of note, on the issue of inexpensive real estate Miles declined provide a ranking stating that: “There is no such thing as inexpensive real estate in Boston.”

In conclusion, for a life science company to succeed it needs to be close to the key resources that provide key competitive advantages in their industry segment. Universally, the right talent and access to early-stage capital are the most critical factors.