Successful fundraising campaigns target investors whose interests match the firm’s product offerings and stage of development. If you have an early-stage life science company looking to raise capital, how do you identify and prioritize your options?

Where you are located will affect your ability to attract investors. Investor preferences are geographically-driven.  Venture capital investments by industry sector are a good indicator of these preferences because they are based on the areas of strength in given geographies. The top three metropolitan regions receiving Life Sciences venture capital funding during 2012 were the San Francisco Bay ($1.7 billion), San Diego Metro ($709 million), and NY Metro ($415 million).  In Q4, the top five metropolitan regions receiving funding were San Francisco ($588), Boston ($278), NY Metro ($214), San Diego ($142), and the Great Lakes ($94 million).  And, investments in Biotechnology deals accounted for 71 percent of the dollars invested in the top five regions in Q4 2012. (PWC)

What does this mean if you are in the middle of the country, for example Minnesota? 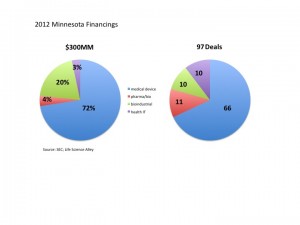 Minnesota, in contrast to the big coastal markets, received only $250 million in venture capital investments in 2012. The majority of capital, representing 93% of investment dollars, was put into medical device and bio-industrial companies, while only 3% was invested in biopharma, and 4% in healthcare IT. More than 65% of these deals involved small raises of under $1 million each, while 86% of these deals were under $5 million. It is important to note that Minnesota instituted an Angel Tax Credit in 2012 that is capped at $5 million per qualified company. This may be driving more investment interest in seed rounds, but how do you fuel growth past the first 1-2 million dollars? This is of particular importance if your company is focused on a market segment that is not highly represented in your region.

If you are a young company in Minnesota or other less favored regions, you’ll need to be very strategic about obtaining your capital requirements.  Angel dollars can get you started. Look for individuals, groups, and syndicates of angels. In Minnesota that would be the Minnesota Angel Network, Gopher Angels, GUST, and Twin Cities Angels. A good resource for angel groups globally is the Angel Capital Network.  But angel funding doesn’t get you far unless you are an IT play, so you will need to supplement potential angel investment with as many sources of non-dilutive capital as possible.

Foundations that invest such as the Leukemia and Lymphoma Society, government dollars for new companies in the form of SBIRs and STTRs , and strategic partnerships with larger firms can be helpful in providing the cash flow necessary to achieve pivotal milestones.  Apply for government funding early and often, and consider using a firm such as Freemind Consultants to access as many of these sources of funds as possible.

Develop relationships with strategic partners who can support you not only with investment dollars but also in other critical resources.  One partnership we developed for a start-up has resulted in ten years’ free use of space in the partner’s facility, use of their equipment, their administrative personnel, their financial services, and additional research support. Infrastructure provided by strategic partners can go a long way toward offsetting the cost of a new business.

Just as you need to develop a business strategy, you need to develop your resource and funding requirements and a strategy to address them.  It’s not enough to just have a plan for how much capital you need to get to the next milestone or phase in development.  Define what you need to do yourself and own yourself, versus what can be provided by others. Understand where your needs align with the interests and resources of others.  Find partners that can provide the infrastructure you need in exchange for knowledge, networks, or innovations you have.  Look for funding from organizations, foundations, and non-profits that have the same goal, whether it is curing cancer or improving healthcare outcomes. And don’t discount government funds.  Yes, it takes time to apply and finally receive the dollars.  But non-dilutive capital is always an advantage. Finally, forge partnerships that provide more than money.

Maybe it is less about bootstrapping and more about strapping on your boots.